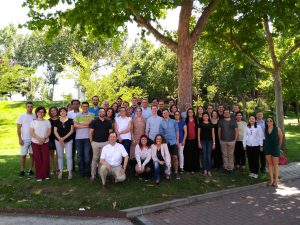 After a full year of very fruitful work, the whole MetaFluidics consortium gathered in Madrid on June 12-13, 2017 to assess progress, share results and plan the next actions.

The first-year progress meeting of the MetaFluidics project was held in Madrid on June 12-13, 2017, organized and moderated by Project Coordinator Dr. Aurelio Hidalgo, Principal Investigator at the Universidad Autónoma of Madrid (Spain). In total, over 40 participants from the 13 partners attended the progress meeting, sharing the results obtained after 12 months of this very exciting four-year interdisciplinary and intersectoral cooperation.

Coordinated by the Universidad Autónoma of Madrid (UAM), MetaFluidics includes the participation of 5 companies, 5 universities and 3 research organizations from Denmark, Spain, France, Norway, Portugal and the United Kingdom. This project is funded with more than € 8.8 million by Horizon 2020, the European Union’s Research and Innovation Programme, under the Industrial Leadership call and the topic “Metagenomics as an innovation driver”.

The objective of this collaborative research is to integrate a range of technologies into a user-friendly platform to identify genes of biotechnological interest.

Thanks to very successful collaborations, DNA samples from natural environments all over the world have been collected and the first hits have been discovered in this natural diversity. New screening technology is being developed, such as the one described in the first publication of the project, entitled “Are in vivo selections on the path to extinction?”. The article was published in Microbial Biotechnology and elaborates on how droplet microfluidics will become a disruptive technology in the next few years.

Over the past 12 months, MetaFluidics partners have participated in several major international events including Functional Metagenomics 2016 (Inderøy, Norway), BioProsp 2017 (Tromsø, Norway), CBM 12 (Vienna, Austria) and AbSciCon 2017 (Mesa, AZ, US). The next event on the agenda is FEMS 2017 (7th Congress of European Microbiologists), held in Valencia, Spain.

For more information on the MetaFluidics project and its activities, please check our website: www.metafluidics.eu or contact us at info@metafluidics.eu.

MetaFluidics is also on social media: